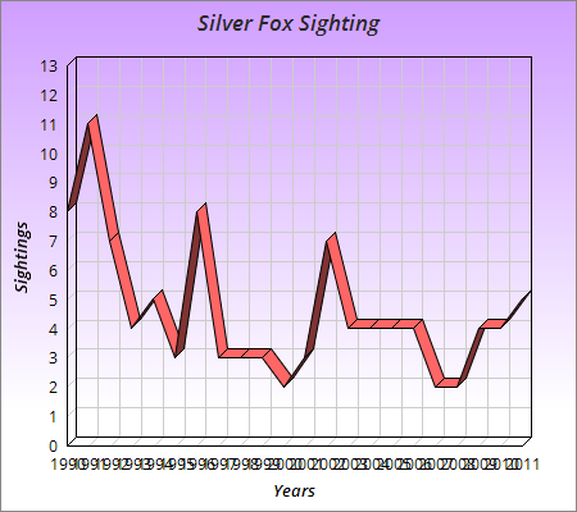 SIlver Foxes live in dense forest that are usually very dark. The reasons behind how many sightings there has been in the past 20 years or more is that they have bred with foxes that have a darker fur color. Since the fur is a darker color other than like a grayish color they are able to blend in to their surroundings easier than a brighter colored fox would. Another reason why it has so many bumps is that when they breed they also look for foxes that have stronger legs or are shorter. The stronger the legs the silver fox has the faster and longer it will be able to run away from predators. These two forms are part of Natural Selection. They chose the mate that has more of a chance at being able to make the next generation stronger. When they mate there can be a variation from the parents and the kids. It all depends on if the dominant or recessive genes show up.


Sometimes there is a possibility of the foxes to have sexual selection and not natural selection. Sexual selection is when the females choose who they mate with because of their appearence or just because they like them. They don't mate with them in order to make the next generation better. I believe that in the graph above, there is a huge chance that towards the end there was some sexual selection going on.

I believe that the population will slowly start to grow again. I believe this because once their is fewer and fewer foxes, they will have to actually breed in order to survive, therefore natural selection. Then once they bring their population they will keep breeding using natural selection in order to keep the next generations strong. Now, the population will drop sometimes, because if it doesn't then it means that there will end up being way too many silver foxes in the world. Also it will drop because of predators, hunters, and just sickness or disease that will be spread throughout the animals.

Future Population's impact on the ecosystem.

If the silver foxes population stayed very low and ended up going extinct, then it would effect the ecosystem because then there would be way to many plants that wouldn't be getting eaten. Also the predators that eat the silver foxes would have to find other food resource or they would slowly start to die off.


If the population continued to increase then the food resources and the shelters they need in order to survive would start to slowly disappear. They would have to move to a different area and adapt to the surroundings. The popoulation would lower because it takes awhile to adapt to a new area.
Powered by